Since my last newsletter, I have been in no altercations. Thank you for your outpouring of support. The “Smith! Dive Away!” mantra is embedded in me now.

I got my hair cut. All of ‘em. RIP man bun. The tail hangs off the living room mantel as I ponder what to do with it (Fishing fly material? Rear view mirror decoration? Cat’s play thing?) I feel no remorse. It’s not as thick as I remember it. For a few days I reached for the back of my head, while watching TV with my mom, as for an imaginary friend to play with, and it was gone, but not like a good friend gone, just hair gone.

My family is overjoyed.
I was forbidden by all the women in my life to wear my hair down. Ever. When face to face with that image, my youngest daughter became physically repulsed.  The eldest, the perturber, goaded me on. I want to thank my wife for her stoicism throughout. And my mother for her unconditional support.

Haircuts take courage. I had taken to identifying categories of older men with long hair: Old hippies, Bad ass codgers, Eccentrics, Artistes, the Insane… Where was I in that spectrum?  When I saw other men my age being clever with their hair, I often thought, “What a Jackass. See how he fancies himself”

Still, it was hard to call an end to my own hair project.
Several months ago, I called my hair guy for an appointment, ready to go for it, but while waiting for him to return my call I realized that my hair was so long I could tie it in a knot without using a rubber band. The discovery of this compelling opportunity was not to be squandered. That would only foster regret. So I did that for a while.

Finally I caught a glimpse of myself in the living room window, and saw what the neighbors saw:  A 65-year-old man, watching TV with his 97-year-old mother, playing with his long hair. Ignatius J Reilly came to mind. Then Norman Bates. It was time. My hair was wearing me.

This is a good hair cut. Most haircuts are good haircuts once you get them. As I walked home I caught my image in a window, and nodded as if to an old friend. I was reminded of monumental haircuts I have known. The ones that left indelible marks.
I’ve been butchered (super short haircut I had petitioned against) by three barbers in my life. Not their fault. I had a unique, peculiar frizz to my hair.

First as a senior in high school, in 1970, by an African American barber on 19th & Prospect who caught me in front of his shop and convinced me that he knew how to cut hair like mine. He would have been the first, but he was not up to the task. When he was done he said, “It’s not a bad haircut. It’s just a short haircut.” He was right.
The positive result was: It happened two days before I met my first girlfriend Barbara Williams’ dad, who was an FBI agent. He thought I was a great guy.

Next, outside of Cairo.1978.  It was hot and dusty.  I even learned some Arabic to negotiate with the barber (his shop was outdoors), that I wanted Half of the length cut off. Half! He spoke English too, and was a professional, so I trusted him. Same result, with even wider whitewalls.
The positive: It felt really good in the heat. And the barber and his assistant both insisted that I looked like Omar Sharif.

Finally, in Japan. 1982. Same scenario: Hot hot hot, with the same result. As short…as…can…be.
The positive: People assumed I was military, so I went to Iwakuni with a military friend and was able to buy shoes at the base. And the barber and his assistant both insisted that I looked like Charleton Heston.

I suppose I was going for the eccentric artist who wears his hair long because he can… look. I dunno. But I think it’s time to take the hair from the mantel. The grieving period is over.

Speaking of grieving, I won’t get into it here, except to say that our dog Harley was an awesome dog, and the recent lack of his presence has a much greater impact on our world than my lack of hair. Sayonara Harley. You were loved. Mushroom hunting and a thousand little things will never be the same.

Drop-In Sunday Workshops
The 1st & 2nd Sundays of every month!!! Shall I commit for another year!!??  Yes, I shall.
First Sunday of every month: Drop-in Improv workshop!
All levels welcome. It’s basic, with a slightly different focus each month. Come!

For October 7th only!!! We will be down the street. On the back side of The Bush Hotel. There is a park on King St. & Maynard. We are just NE of the Pagoda in that park, down the stairs. If you go to Freehold, there wil be a note on the door. See you there!

Second Sunday of every month: Story workshop: You Can’t Make this Stuff Up.
Looking to hone your stories? Whether you want to do improv, theatre style Check-ins, Monologues, Moth stories, Stand-up, Memoirs, or a Novel, this method just might be real Helpful.

Haw Hee
“a great short film” – Matt Smith
“Genius” -Bret Fetzer
After months of short festivals, it is time to present Haw Hee.  Please watch and share this film by Bret Fetzer, featuring me. The original concept came out of a Sunday dinner with John Spiers, at The Atlas Cafe, after watching Japanese films at The Kokusai Theatre, a long time ago.

Recording Artist
Yes, you read that right. Please add that to the list of things I fancy myself being. Please look at this rough version of my album cover. 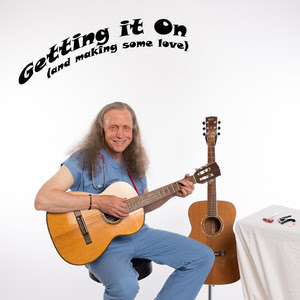 (photo by Fat Yeti). It will help you understand my daughter’s response. I defy you to look without looking away!

Let there be no doubt: This is a vanity project. It’s important to me that you know that I know that.  I am paying real-deal musicians (Eric Eagle, Bill Molloy, Ivory Smith & others) to make me sound better. The first two sessions have been affirming; Five songs, just drums and rhythm guitar. On one song, Baba Ram Clam, I did sing and play the guitar….then they erased my guitar. I understand. The voice? They  have technology to overcome its “challenges”.
With our schedules it will take a while. But it’s on!

In the Workplace
For some of my Workplace events I have been bringing in Joe Guppy to help. We recently worked with the Board of Directors of The Northwest School. We call ourselves The Silverbacks. His energy and background add credence and dimension to what I  bring to work cultures. Let me or Joe if your group could benefit from the magic of The Silverbacks.

To let me know that you read, or skipped, to the end, please respond with the secret code, Getting it on, And Making some love. Thanks for reading! See you Sunday! No, really! Come on down!   Matt